One of my recent projects has been a quilt for James, first grandchild of our friends Melanie and Chris. We have known Ben, James's Dad since he was a young boy and he used to babysit for my boys when they were babies. When I heard that Ben and his wife Becky were expecting a baby in March I decided that the new arrival must have a quilt! 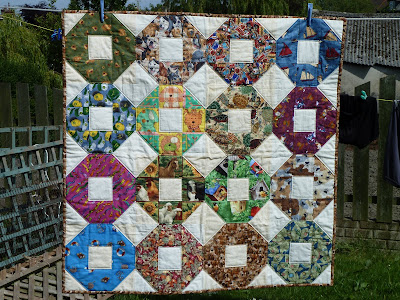 The quilt block I chose was the Shoofly Snowball block we used for the Block Lotto at the International Quilting Day. I decided to make it as an 'I Spy' quilt rather than a traditional baby quilt so that James would be able to continue to enjoy it as he grows up. Each block is made using a different novelty fabric and I have used images that are important to their family. 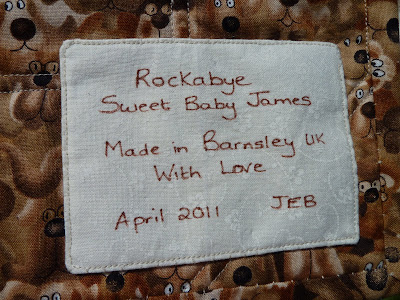 Here is a photo of the quilt label. I named the quilt for two reasons. Firstly right from when I heard that James was born the James Taylor song just kept coming into my head and I sang it to myself when I was piecing the quilt. I am a fan of James Taylor and particularly enjoy that song.
Secondly, one night years ago when we returned home and Ben was babysitting Jonathan, my eldest son who was then a very small baby, Ben was rocking him to sleep in such a gentle way that the image has stayed with me ever since. I knew that one day Ben would make a great Dad himself. 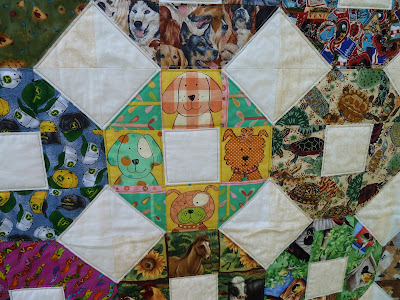 Here is a close up of some of the fabrics - lots of interest for a growing baby. 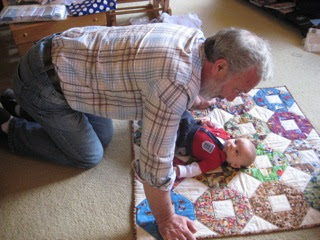 And finally here is a photo of the quilt, James and his proud Grandad. I forgot to say that James lives in Canada so it was a very special time for his grandparents who probably won't see as much of him as they would wish for.

I love your baby quilt! And, because I too am a James Taylor fan, I think you have done a terrific job of naming this quilt. I hope little James loves his quilt!

What a great quilt! Love it