In my Tuesday class we are making more blocks for a small quilt. The purpose of the class for this term is to learn how to make a quilt with blocks 'on point'.
My starting point was the Apple Tree Block from Barbara Brackman's Civil War Quilt blog but then I played around with basket, tree and leaf blocks to come up with 13 blocks which play nicely with each other and are meant to be set 'on point'. 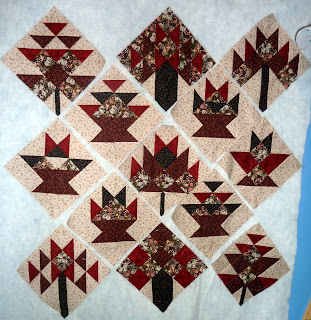 This is the layout I have decided upon. 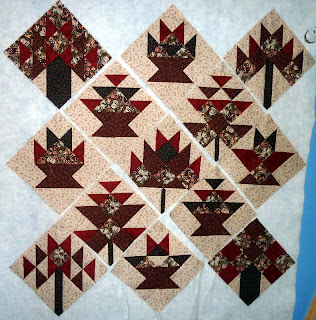 This is my first layout with the 'heavy' tree blocks on opposite corners but I think that the new layout above looks more balanced. I did think about remaking some of the blocks but that's not in the spirit of patchwork is it? 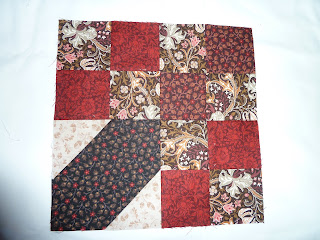 Here is the starting point - the Apple Tree Block

Next is sashings - although these are not needed in an 'on point' quilt I like them to define my blocks. I did not have enough of my first choice fabric so am now auditioning a couple of fabrics.
The fabric I have used for the blocks is partly Barbara Brackman Civil War Reunion and Woodrow Studios William Morris.
Posted by Janet at 11:32

So glad I found your blog - I have been looking at Civil War blocks and somehow came across you! Your quilting is lovely and I am your latest follower. Even better that you are in Barnsley, as I live in Norfolk but am from ... Doncaster, and have family in Barnsley!

Our quilt group in Bradford has just done a civil war quilt as a group project. Love the colours of your blocks!