A Mini Quilt Inspired by a Vintage Plate..

Following on from my City & Guilds samples I decided to make a mini quilt based on a 1960s plate made by J & G Meakin.
I started with a four patch, 2 calico squares and 2 linen squares. I then bondawebbed strips of fabrics into the star patterns. 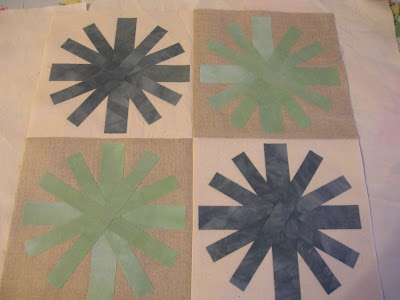 Here is the plate which I used as my inspiration. I liked the scribbles on the stars. I tried to use a similar colour scheme. 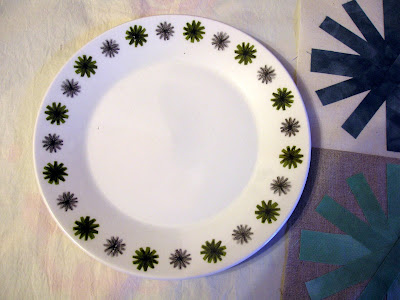 I then covered the four patch with a sheer fabric and layered up with wadding and backing. Using the automatic stitches I machine quilted the scribbles on the stars. I really liked the patterns which formed by the overlap of the stitching in the centre of the stars. It was then bound with a skinny binding. Finished size 10 inches square. I will put it into my City & Guilds folder but as an extra to the work we were asked to do.

Wow! That is fabulous. I love the colours with the sheer over the top and the stitching creates a lovely pattern. Can't wait to see it on Saturday!

I agree with Hazel - I think it looks great, am sure the photos dont do it justice. See you Saturday x

I think this is the set we had as kids - I'm sure my mum will still have it some where..... your mini quilt looks fabulous!