I have finally completed Step 1 of Double Delight, Bonnie Hunter's New Year Mystery Quilt. There are 120 of these 3.5 inch blocks! The layout is not how it will be in the quilt but I thought it was better than just showing one block. 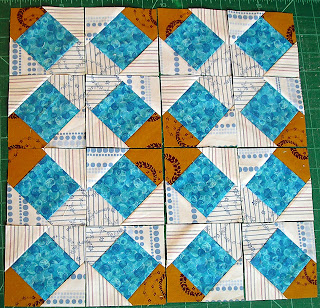 I have had loads of help from the cats while doing this quilt but this photo shows Maisy during one of her shifts! 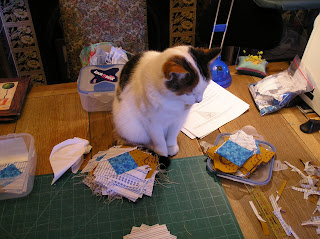 This was one of my Christmas books and I decided to make one of the bags from it which was actually completed on Dec 30th - I just forgot to show it. 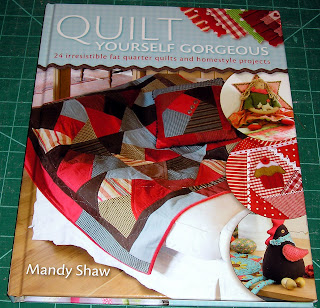 Unusually the pattern calls for both heavyweight and quilting cotton so I was able to use some heavier cotton that I bought for £1 per metre on Rotherham Market some time ago. I really liked it when I saw it so bought 2 metres. When I got home I discovered that it was actually a Cath Kidston fabric called Pop Flowers. The next week at the stall I asked for some more and he told me that it had all gone - someone had told him it was Cath Kidston and had bought it to sell on ebay! So now I study the Cath Kidston catalogue religiously so that if any more crops up I will recognise it straight away! 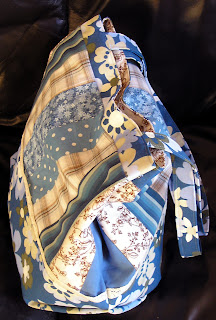 Most of the other fabrics are from repurposed shirts except the lining which is a vintage cotton curtain I bought from a car boot for 30p. 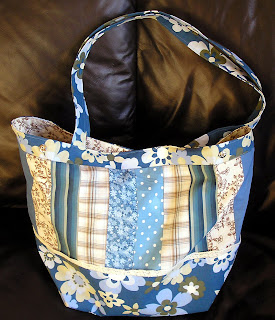 It is a bucket style bag with loads of space in it - I have put a couple of press studs on the top binding so it can be folded in when not in full use. The bottom is one of those funny folded triangles which I am not sure I really like but I do like the bag as I feel that it does capture the vintage shabby chic look I was trying to achieve.

Love the Double Delight blocks, the colours are really vibrant. I am just putting the borders on mine :-) can't wait to see what other colours you have put with them. Keep at it, its well worth it.

Love your colors. Can't wait to see it put together. I see you have the same type of inspectors as I do. They love their job!

I love your colors in your DD quilt - I can't wait to see the finished product. Your cat is neat too!!

The DD blocks look great, I just love the turquois.