Yes I know its March!!
I was late doing this and I felt so guilty that I had to make two! Actually I always enjoy the swaps and find that often I want to make more than one.
February was Sherry's month - she wanted black and white blocks 12 inches square. 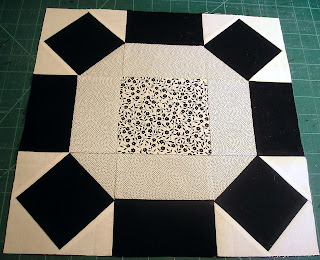 This first block is from Judy Hopkins' Book Once More Around The Block - it is called 'squirrel in a cage' (??) 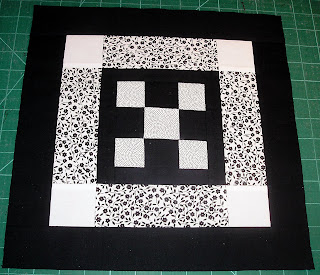 The second block I made up to use the pieces I had left over - this would've worked really well except that I cut the outer borders wrong TWICE and had to cut into much more black. Anyway I am going to make some little black and white HST's for my maverick stars border with what is left over. 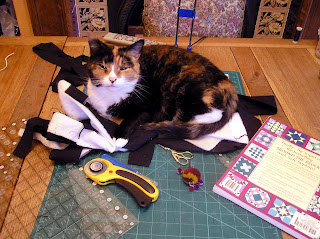 Cilla decided I needed some help!

Gosh, I feel so.....slow!!
How do you manage to do these so quickly...I'm still struggling with maverick stars! and they are not looking very good. Oh, well, Practice makes perfect,yes?

Oh by the way, I know I'm nosey but what is that book in the corner. I'm off to London on Sat and am looking for recommendations to look out for.

Hi! You have a nice blog here. I just had to say, this is just the same thing my cats do. Even if there's only a 3 inch scrap of fabric on the table, they have to sit on it! Thanks for sharing, maybe you would like to stop by my blog too. Take care, and Keep Piecing, Carol Jean