OK, I admit it, I read loads of quilting blogs! Too many probably.
However one of the techniques that I have been admiring is embroidery in quilts - sometimes known as 'stitchery' or even a variation of redwork. For many years I have been an embroiderer so was really drawn to this technique. I never was much of a 'freestyle' embroiderer but loved the primitive / folk art qualities of the designs.
One set of designs that I particularly liked was the Noah's Ark block of the month by Lynette Anderson. Here is the link if you want to join in. 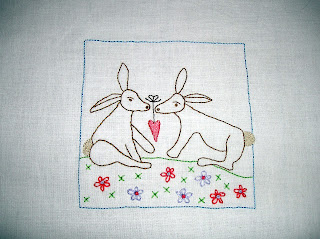 This is my version of the first block. It was lovely and easy to stitch, so relaxing and easy to do while watching TV. The white fabric I have used is from a vintage cotton pillowcase I bought in a charity shop for 35p. There should be enough to do all the blocks and it has a lovely washed and worn feel to it.

I decided that I wanted to make my blocks double the size so my finished quilt will come out bigger. So this little block is approx 5 inches square. This has worked fine with the first two blocks but I have had a few technical hitches enlarging the others. Hopefully I will be able to resolve these as I really love the designs. 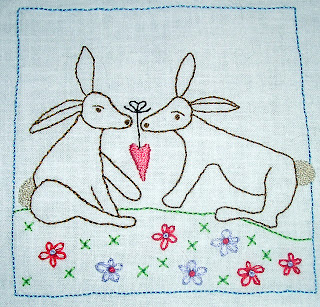 Here is a close up. Have a look at Lynette's blog - I am sure you will be tempted!


I am also working on a new quilt which needs to be done quite quickly. I am just at the design stage but will share on the blog soon. Last Monday my youngest son's close friend was in a very serious accident and will be in hospital for some time. He was crossing at a pelican (pedestrian) crossing and a car hit him going at high speed through the red light. He suffered serious head and neck injuries and it was touch and go for a few hours whether he would survive. He is in hospital in the nearest city to us but we are hoping that he will be transferred to the local hospital soon (which just happens to be a few minutes walk from our house). He has a blood clot on his brain and may need surgery so the doctors are waiting to see how the situation develops before they move him.
Obviously I thought about making him a quilt immediately. I mentioned it to Rob expecting him to dimiss the idea as childish as Jamie is 18 years old. However he thought it was a great idea and we have even been working on the design together. It will be a fabric painted wholecloth quilt based on an image from an Xbox game which Jamie happens to have tatooed on his arm!